The West Point Military Reservation is a U.S. Army installation in southern New York State located in east-central Orange County spread out among the townships of Highland, Woodbury, and Cornwall. Constitution Island, located across the Hudson River from West Point's Main Post (Cantonment Area) is also part of the West Point installation and lies in west-central Putnam County in the town of Phillipstown. West Point is approximately eight miles south of Newburgh, NY, the largest city in a ten mile radius. New York City, the largest city in the United States, is approximately forty miles south of West Point.

At over 16,000 acres in size, the West Point Military Reservation is the second largest military installation in New York State (second only to Fort Drum at over 108,000 acres). West Point's Army Garrison is considered to be an "open post" with millions of people visiting annually to sightsee, attend special events, and visit cadets or community residents. To accommodate the demand for public outdoor recreation, there are designated recreation areas both on the Main Post and elsewhere on the installation, specifically at Round Pond and Lake Frederick.

Of West Point's roughly 16,000-acre total area, about 7,500 acres of it are off-limits to hunting. This area includes most of Main Post (Cantonment), off-Cantonment training areas like Camp Buckner, Camp Shea, Camp Natural Bridge, current and historic UXO Areas (Unexploded Ordinance Areas aka Dud Danger Areas) and ranges, designated recreation areas like Round Pond and Lake Frederick and some a few other Off-Limits Areas. The remaining 8,500 or so acres of the installation - broken up into almost 50 Hunting Areas - is made available for the purposes of big game, small game and waterfowl hunting.

In addition to availability of an area for hunting, the ability to hunt in certain areas may also be restricted based on the type of hunter one is, hunting implement one is hunting with, and the designated hunting capacities of an area. See USMA Regulation 215-5. General public hunters are restricted from accessing about 1,850 acres of otherwise-available hunting area - including Waterfowl Areas, Bow Only Areas on Main Post, Constitution Island, and special training areas near Camp Buckner, Camp Shea, and Round Pond in addition to a few other areas.

West Point also has thirteen lakes and ponds off-Cantonment, and West Point allows for permitted anglers to fish on these water bodies. Along with the off-cantonment fishing areas, on Main Post (Cantonment), Lusk Reservoir is also regularly fished. In all, Lusk and off-cantonment lakes/pond total 510 acres. The largest of all of these on the West Point Military Reservation is Popolopen Lake (149 acres). Round Pond and Lake Frederick are designated recreation areas. See West Point's MWR website for more information.

In addition to the standing lakes and ponds (and Lusk Reservoir), West Point also has miles of fishable streams, lakes, and river access. Fishing on the Hudson River is available from both Main Post (Cantonment) and Constitution Island. Off Cantonment, trout are stocked and popularly fished for on Popolopen Brook off Mine Torne Road above Weyants Bridge and, when training does not conflict, below Weyants Bridge. Please be advised that Mine Torne Road may be closed, especially during Summer Cadet Training, due to range firing. Highland Brook, accessed off Route 9W, has also been stocked with and fished for trout in the past.

The area surrounding West Point is generally mixed rural and suburban with residential and commercial areas concentrated within villages and hamlets of Highland Falls and Fort Montgomery to the southeast and the hamlet of Central Valley and town of Woodbury to the southwest. There are numerous state lands, including state forests, state forest preserves, and state parks within a ten to twenty mile radius of West Point. The majority of the installation's southern border directly abuts Harriman State Park and Bear Mountain State Park. To the north, West Point borders Storm King State Park and the privately operated Black Rock Forest.

The West Point Military Reservation is most famously home to the United States Military Academy, the four-year coeducational federal service academy of the U.S. Army. It serves as an educational institution and military garrison with the surrounding reservation serves as a training facility for West Point cadets and visiting military. The initial land acquisition in 1790 was for a 1700+ acre plot that included the land on which Fort West Point had been established and occupied by the Continental Army during the American Revolution. Between USMA's founding in 1802 and 1974, an additional seventeen land acquisitions took place until West Point reached its current size. The largest of these was a 10,000+ acre purchase in 1942. West Point is an active military installation and recreational use is second to the military mission. 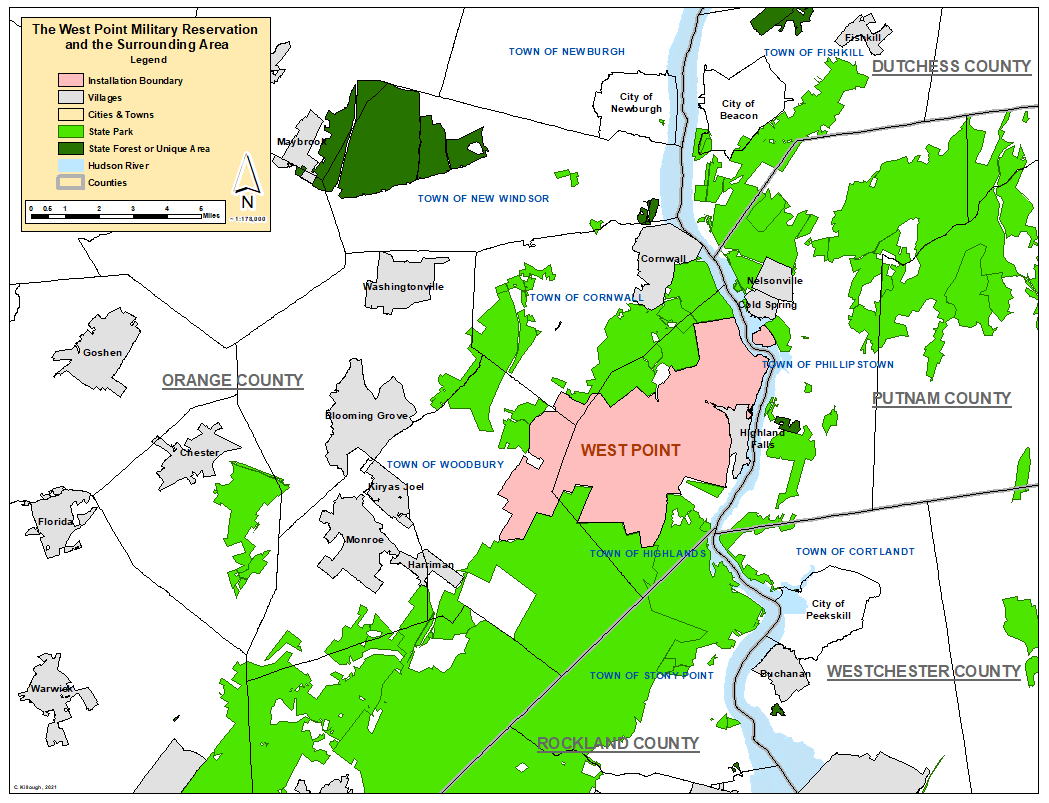